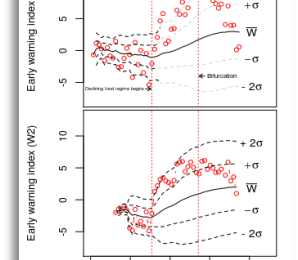 Above – A composite early warning index comprising all four indicators is highly sensitive to the onset of critical slowing down. a, Time-specific calculations of W1 when plotted against time show that non-stationary behaviour in population dynamics may be detected within three weeks (where dashed lines change from black to grey) if a 2s standard is used to trigger a warning and within two weeks if a 1s standard is used to trigger a warning. The solid line shows the running average of W1, which will be zero for stationary systems. The index W1 is based on the standardized mean difference between deteriorating environments and constant reference environments. b, For comparison, we also investigated a composite early warning index that depends only on the data stream resulting from chambers in the deteriorating environment treatment (W2). This index was highly sensitive to fluctuations in the period before the onset of environmental deterioration and never clearly departed from2s region. When optimized, however, this index detected critical slowing down as early as one week after the onset of environmental deterioration.

Background   The effect of directional or periodic environmental change on population dynamics is more poorly understood than dynamics in stochastically-varying environments.  Sustained directional changes, such as warming or cooling may result in decreased population growth rate and increased risk of extinction.  For example, continued warming will begin to exceed species tolerance, pushing per capita growth rate below zero.  A population experiencing periodic variation over a similar temperature range is likely to experience a very different average growth rate and extinction risk.  Additionally, the transition of population growth rate from positive to negative expected under some directional environmental changes can be thought of as a critical transition or regime shift.  There is current debate about whether critical transitions can be detected before they occur via signals such as increased variance or return time (Scheffer et al 2009, Hastings and Wysham 2010).  Extinction is a particularly important critical transition, and if these proposed signals are detectable in extinction experiments they may offer utility for detecting negative impacts of environmental change before extinction occurs.

We are developing both discrete-time and continuous-time stochastic models of these processes.  Both intrinsic growth rate and carrying capacity are allowed to vary as the environment deteriorates, resulting in different dynamics and approaches to extinction.

Experiment 1 – Continuous decline in resource abundance
We argue that the causes of a population’s decline are central to the predictability of its extinction. Specifically, environmental degradation may cause a tipping point in population dynamics, corresponding to a bifurcation in the underlying population growth equations, beyond which decline to extinction is almost certain. In such cases, imminent extinction will be signalled by critical slowing down (CSD). We conducted an experiment with replicate laboratory populations of Daphnia magna to test this hypothesis. We show that populations crossing a transcritical bifurcation, experimentally induced by the controlled decline in environmental conditions, show statistical signatures of CSD after the onset of environmental deterioration and before the critical transition. Populations in constant environments did not have these patterns. Four statistical indicators all showed evidence of the approaching bifurcation as early as 110 days (,8 generations) before the transition occurred. Two composite indices improved predictability.

Experiment 2 – Continuous change in temperature
Daphnia populations were followed under treatments of slowly increasing, decreasing, periodically-changing and constant temperature.  Very high resolution data on population size and growth from 96 replicate populations will provide an empirical test of the model predictions both for time to extinction and signals of the critical transition.  The extensive replication is a distinct advantage of this system, due to the inherent stochasticity of the dynamics of small populations. 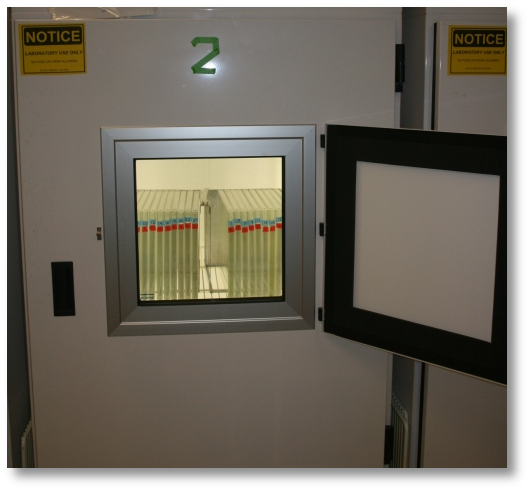 Populations of D. magna in an incubator.  Populations were exposed to temperatures that increased or decreased on a daily basis in order to examine population dynamics in a deteriorating environment.