Goal. Project AERO (Anticipating Emerging and Re-emerging Outbreaks) is a collaboration involving researchers at the Universities of Georgia, Michigan, and Penn State and a part of the MIDAS Network. The goal of the project is to develop new methods for forecasting emergence and re-emergence of infectious diseases based on the theory of critical slowing down. 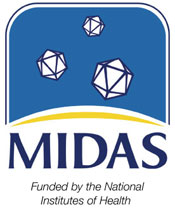 What’s critical slowing down? When low-dimensional dynamical systems approach a tipping point, they often exhibit characteristic patterns in data that reflect the loss of the tendency to return to equilibrium. Contagion processes often act like low-dimensional dynamical systems and emergence/re-emergence occur at tipping points. Putting these together, we thought it made sense to see if disease emergence is preceded by critical slowing down.

Does it really work? We don’t know yet. Early results are promising. We’re building a team to test just how far we can go in providing early warnings of outbreaks and indicators of the effectiveness of control.

What else might this theory be useful for? Lots of things. Another application of critical slowing down in the field of public health is the development of “end game” strategies and monitoring for disease elimination.