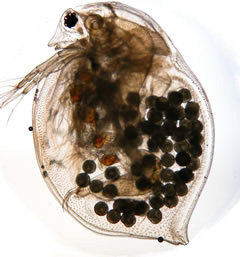 Background. Population persistence is predicted by theory to increase with carrying capacity and a population’s capacity to increase rapidly.  We view both carrying capacity and intrinsic rate of increase as  structural phenomena – effects that emerge from the combination of different density-regulating demographic processes – and therefore potentially the result of multiple environmental drivers. It follows that different environmental factors should interact to determine population persistence time.  We designed an experiment to look at two factors expected to jointly determine carrying capacities and persistence times of laboratory Daphnia populations: habitat size and food abundance.

Experimental Design.  The experiment was carried out with populations of a single D. magna clone reared on the blue green alga Spirulina.  As Spirulinadoes not reproduce under our experimental conditions, this system is a model of a true resource-driven population.  The experiment comprises two fully crossed treatments: habitat size (700 mL or 1400 mL) and feeding rate (200, 400, or 800 microliters of food suspension.) In Spring 2007, 96 populations were initiated with five individuals each.  Populations were censused weekly and the experiment ended when all popualtions had gone extinct (49 weeks).