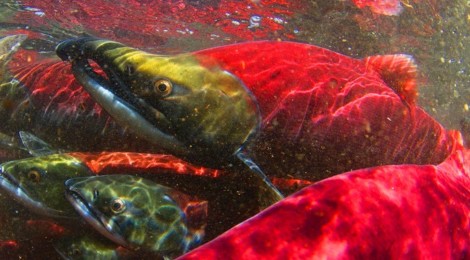 Early warning signals for critical transitions have now been described from a number of ecological and geophysical systems. Most of these signals reflect a dynamical phenomenon called critical slowing down (CSD). One possible application for warning signals based on CSD that has not yet been developed is the forecasting of fish stock collapses. A precursor to the development of any such early warning signal is the demonstration that critical transitions in fish populations exhibit critical slowing down. A new paper by Marty Krkosek (University of Toledo) and John Drake shows that Pink salmon (Oncorhynchus gorbuscha) exhibit increased variance and autocorrelation as the critical point is approached (consistent with the theory of critical slowing down), but that Sockeye salmon (Oncorhynchus nerka) do not, probably as a result of age structure. Chum salmon (Oncorhynchus keta) are somewhere in between. These results are the first that we know of to describe these “near critical” patterns in harvested species.