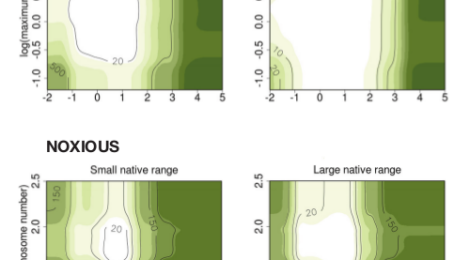 There are many species of weeds, but how many basic kinds of weeds are there? Are weedy species more related to each other than to other species? Do they cluster in particular genera or families? Are there characteristics that distinguish weeds from other species?

This study, by J.P. Schmidt and John Drake answered these questions by mining data on 4,953 species naturalized in the United States. For each species, up to 187 attributes encoding a range of ecological, geographical, floristic, and taxonomic information were obtained. Using methods borrowed from machine learning and pattern recognition, these data were analyzed to identify those species that might become invasive in the United States.

The final outcome of this work was performed in collaboration with economist Mike Springborn, combining these results with new estimates on the costs of invasive species as well as the value of new plants to trade, to produce a cost-sensitive decision tool that could be used in regulatory decision making. Along with the research article, we also produced a fact sheet explaining more about the decision tool and a list of 764 potentially invasive species.

The figure above shows decision boundaries at cost ratios φ = 10, 20, 50, 100, and 500 for weeds (top), and noxious (bottom) species. Using this figure, for a given cost ratio a decision-maker optimally rejects a given proposal if the attributes of the proposed species (given on the horizontal and vertical axes) map to a position that lies within the contour (towards lighter shading). For instance, using the decision graph for noxious species and assuming a value of φ = 10, a species with a small native range for which ln(seed mass) = 1 and  standardized maximum chromosome number = 10 would be denied entry, because it falls within the φ = 10 decision boundary.