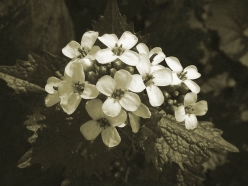 Garlic mustard (Alliaria petiolata) in an invasive understory herb in forested areas of the Eastern United States. Two features make garlic mustard interesting from a control standpoint. First, it is allelopathic and therefore readily displaces native vegetation. Second, it exhibits strong density dependence and has a biennial life history. These latter two properties are a recipe for complex population dynamics. In collaborative work with Tiffany Knight, Jon Chase, and Eleanor Pardini at Washington University in St. Louis, we are investigating the population dynamical consequences of these phenomena.

A Population Model for Garlic Mustard
The first step in this research was to develop a suitable working model for Garlic mustard population dynamics. From preliminary field observations, it was clear that both seed production and rosette survivorship were nonlinear (i.e., density-dependent).

Using pilot experimental data and life history information gleaned from the scientific literature, we developed a model for population dynamics of an incipient garlic mustard population.  True to its family resemblance (a nonlinear map with multiple state variables) this model exhibits complex dynamics. Further, it was a tool to simulate what occurs when a manager tries to control population dynamics.  Somewhat surprisingly, we found that some kinds of control would actually exacerbate invasive Garlic mustard populations. This idea was the basis for a grant from the USDA for an ongoing project to better develop the idea and to perform tests in field trials. 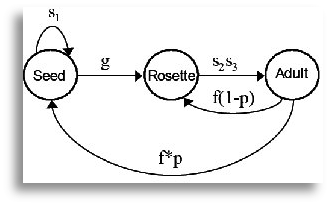