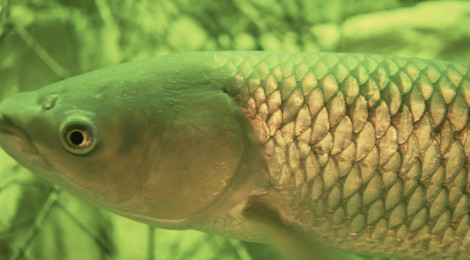 Many species of carp are invasive in North America, accumulating large biomass, damaging benthic habitat, and disrupting native food webs. By contrast, the Grass Carp (Ctenopharyngodon idella) is not listed as injurious and its pest potential is not well understood. We recently participated in a re-evaluation of the probable ecological impacts of Grass Carp in North America. Our contribution was to develop maps of its potential distribution in the Great Lakes. For this project, we took an approach out of the machine learning playbook. First, we’ve been looking at the concept of an ecological “niche” as an instance of a closed set with natural boundary in a (possibly) high dimensional space of potentially important ecological variables. Thus, the goal of niche modeling is to learn this boundary. From machine learning, we take the concept of one-class classification and used seven different approaches, primarily derived from the work of David Tax. These included a neural network, a k-means density estimator, nearest neighbor and k-nearest neighbor one class classifiers, a Kohonen self-organizing map, a support vector machine, and a parametric density estimator. We then projected each model onto the geographical space represented by the larger Great Lakes region. To produce a final map of the probable potential distribution of Grass Carp, we voted these seven models to produce a heat map. The two maps shown below illustrate different approaches to choosing input data, i.e. whether (a) only information from the native range of Grass Carp is used, or (b) this information is supplemented by information that we have on the current distribution of Grass Carp in North America. 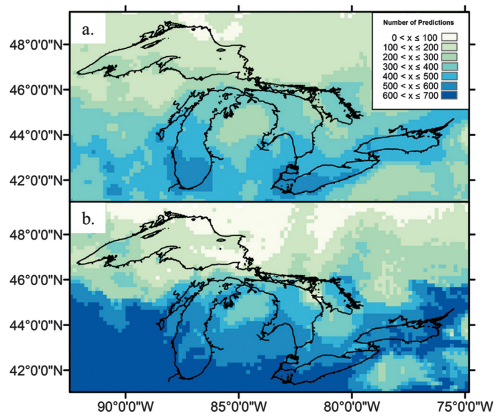 In addition, the study found that Grass Carp are more widespread than was believed and induce a range of environmental impacts on both water quality and the composition of native aquatic communities.