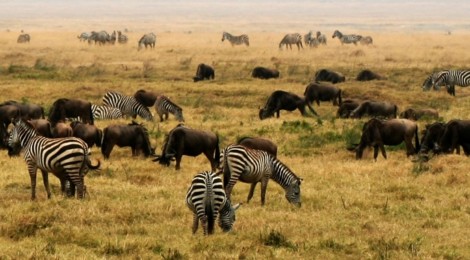 Climate change and the mosquitoes that transmit malaria

Malaria is prominent among the vector-borne infectious diseases widely anticipated to be affected by climate change. Roughly, the idea is that global and regional climate both impose constraints on and provide the raw materials (e.g., moisture) for local weather patterns. Weather events, by contrast, create the habitats that mosquitoes breed in and the fluctuations in air temperature that cause such habitats either to persist or dry up and which may be lethal if conditions become too hot or too cold. However, the way in which these factors interact with each other and with the local topographic and ecological conditions has been difficult to disentangle.

An. arabiensis is a climate generalist but a habitat specialist. This species is particularly interesting in this context  because it bites people out of doors. Historically, An. arabiensis has not been the dominant vector for malaria transmission. But, as indoor malaria control measures such as indoor spraying or insecticide-treated bed nets continue to bring down indoor transmission, the remaining transmission that happens out of doors (where transmission control is more difficult to deploy) is predicted to increase in relative importance.

To model the current potential distribution, we used a machine learning algorithm, LOBAG-OC, to sift through 86 climate variables to build a model of the An. arabiensis niche. LOBAG-OC (which, somewhat awkwardly, stands for “low bias bootstrap aggregation – one class”) is an ensemble method that fits niche models to portions of the data and then votes the results. LOBAG-OC is expected to be robust to model mis-specification due to data that are not randomly sampled. Moreover, preliminary studies suggest that LOBAG-OC can also be used when there is relatively little detailed mechanistic information to guide the modeling process. The fit model was then applied to projected climate conditions under three plausible climate change scenarios from the version 3 Hadley Centre coupled atmosphere-ocean general circulation model (known to climate scientists as Hadley CM3).

Results of this analysis suggest that climate change will probably result in a reduction in the area of Africa suitable for An. arabiensis somewhere between 48% and 61%. Moreover the spatial distribution of those reductions is predicted to be quite robust with respect to differences among the various climate scenarios considered.  These results may be important for a couple reasons. First, they suggest that future reductions in An. arabiensis may not be simply a result of vector control, but rather due to changes in the external environment. If it is important to understand such reductions (for instance to evaluate the effectiveness of control measures) it will be important to take environmental factors into consideration. Additionally, more proactively, vector control or elimination campaigns might be planned to exploit these environmental changes which are going to occur anyway to achieve the maximum effect. Unfortunately, it is not presently known what spatial allocation strategies are most efficient or robust in a changing environment. Indeed, the solution to this problem may depend on further innovations in machine learning or related fields.

Complete results of the study are reported in the open access Malaria Journal. The article was covered by scidev.net.

The LOBAG-OC algorithm is described in a paper in the journal Ecosphere.

This work was supported by grant R01GM093345 from the National Institutes of Health.