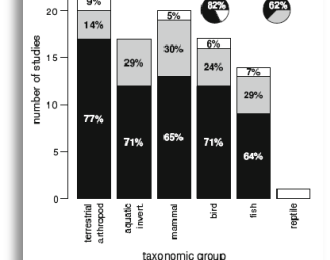 Another approach we take towards understanding the Allee effect is to look for statistical “signatures” in population dynamics, i.e., patterns in population abundance or distribution that are best explained by Allee effects. The theory of Allee effects gives quite a number of such patterns: positive density dependence in per capita growth rate, retarded wave speeds, a minimum critical occupied range, and a sigmoid rather than exponential relationship between extinction rate and population size. Other researchers who have looked for Allee effects in natural populations have had mixed success (see Figure 4 from Kramer et al. 2009 below). In general, Allee effects have been elusive, though flexible tools (like a hierarchical Bayes meta-analysis) have turned up some positive results. It’s our view that Allee effects are actually quite prevalent, but are difficult to detect since low-density populations are rarely sampled effectively and dynamical phenomena are subtle. More success will come with more sophisticated analysis and attentiveness to the details of the population mechanisms giving rise to Allee effects.

The potential prevalence of Allee effects is supported by our review of studies on Allee effects in natural animal populations that found empirical evidence for Allee effects caused by several distinct mechanisms in a diverse set of taxa (59 species, Kramer et al. 2009). Many of the studies which observed Allee effects focused on invasive species or species of conservation concern, both of which are likely to occur at low density. However, we also found that studies trying to detect Allee effects in a large number of population time series found little or no evidence for Allee effects. Our current approach to improving detection of Allee effects has two focuses: 1) examining patterns of evidence in populations often at low density, such as invasive species, and 2) using the insight and patterns from these successful detections to inform meta-analysis of data on population dynamics with new and previously unexplored techniques. In a study of invading zebra mussels, we detected Allee effects in the lag between the time a lake was expected to be invaded and the time the lake was observed to be invaded (Leung et al. 2004). In an analysis of thousands of time-series from the Global Population Dynamics Database, previously used to assess density dependence (Sibly et al. 2005), we used generalized additive models to look for positive density dependence. These flexible non-linear models allow us to consider the possible patterns of positive density dependence in per capita growth rate and the densities and sample sizes needed to detect Allee effects (unpublished). In ongoing studies we are attempting to detect Allee effects in establishment rates of introduced species, patch sizes of invading species, and in further meta-analysis of population dynamics. These represent some open projects in the lab in need of researchers to work on them.