Like many cladocera in temperate environments, the spiny water flea Bythotrephes longimanus exhibits cyclical parthenogenisis in which overwintering resting eggs are produced through sexual reproduction but parthenogenesis dominates production in warmer months.  Our approach to representing this system is to break it down into different phases for parthenogenic growth, sexual reproduction, and overwintering.  Particularly in incipient populations that are small, the process of finding a mate might go un-rewarded, reducing the chance the population persists through the winter. To represent this part of the process we used a model for random mate encounter inserted in a difference equation to track inter-annual population dynamics. The bottom line is that an unstable equilibrium emerges, which must be attained in the first year for the population to be viable. We have taken a couple of approaches to estimating what size initial population can attain this critical density. In Drake (2004) we approximated the period of parthenogenetic growth process with a birth-death process, a stochastic model for clonal population growth in a constant environment. Subsequent analysis determined that this approximation is rather bad-Bythotrephes population growth rates are strongly influenced by temperature, leading to “windows” of invasion risk that occur during times of the year when temperate lakes will be most vulnerable to introduction (Drake et al. 2006). 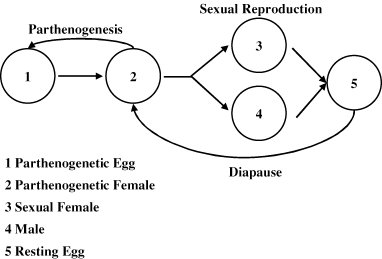