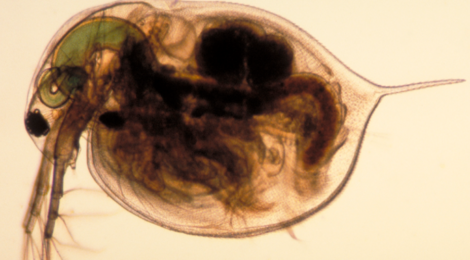 One of the interesting things about the theory of population extinction is that despite widely differing processes for the cause of extinction (demographic stochasticity, environmental variability, environmental deterioration, extreme catastrophic events), virtually all models predict there to be a positive monotonic relationship between initial population size and extinction time. Although this is clearly a testable prediction, attempts at empirical demonstration have been equivocal. We hypothesized that this anomaly is due to the transient properties of ensembles of populations, such that many populations escape their initially vulnerable state to achieve a condition referred to as “quasi-stationarity” where effects of initial conditions are erased. It follows that extinction of populations initialized far from quasi-stationarity are exposed to a two-phase extinction hazard. We tested this prediction with experiments using Daphnia magna. Although observed results were subtle, statistical analysis showed that indeed a switch occurred so that early on in the experiment the extinction hazard was primarily due to the initial condition, whereas later the primary determinant of extinction time was habitat size. This result is potentially useful to understanding how and why extinctions occur in small populations in nature.

Populations initiated far from quasi-stationarity exhibit two-phase behavior that may result in a bimodal extinction time distribution. The goal of our study was to distinguish this two-phase behavior in ensembles of populations initialized far from quasi-stationarity from the exponential extinction time distribution commonly observed when populations are initialized near quasi-stationarity. To illustrate this pattern in its extreme form (a bimodal extinction time distribution), 1,000 simulations of a logistic birth-death process initialized at x0=1 (panel A). The escape to quasi-stationarity is reflected in an initial increase followed by leveling off of the mean Schoenfeld residuals from a Cox proportional hazards model. The depicted Schoenfeld residual plot (panel B) is for a Cox proportional hazards model fit to data from 200 simulations of a logistic birth-death process, evenly divided between populations initialized at x0=1 and x0=5, corresponding to the spread in initial population sizes used in an experiment. The residual mean +/- one s.e. are indicated by the solid and dashed lines, respectively.