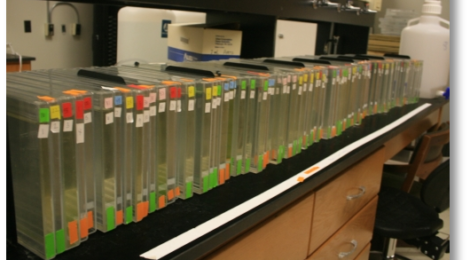 Background. Theory predicts that extinction rates should be lower in constant environments than in randomly fluctuating environments with the same average conditions. This is because average population size grows as the geometric mean of the instantaneous population growth rate and the geometric mean is always less than or equal to the arithmetic mean which is approached as the variance in fluctuations goes to zero, an observation that goes back at least to Lewontin & Cohen (1969).

Experimental Design. To test this prediction we performed an experiment in which 284 populations of the large-bodied herbivorous zooplankton Daphnia magna were each fed a different predetermined amount of food each day for approximately three months. Each population was started with five individuals and assigned to one of three treatment regimes corresponding to the variation in food provided. Populations were monitored to determine if and when each population went extinct.

Results. Overall, we found that the variance in environmental fluctations increased the rate at which populations went extinct. Particularly, although there was no detectable difference between populations in a constant environment and populations with a modest amount of variation, extinctions occurred at a significantly higher rate in populations subject to a large amount of environmental variation. In follow up analysis we determined that a key factor regulating extinction rate was the scaling of demographic variation with population size. This phenomenon, so called “density dependent demographic variance” is now the subject of further research in our lab. Finally, when we looked at the distribution of extinction times we discovered a curious pattern. Although extinctions are initially rapid, the tail distribution is rather fat. It is possible that this fat-tailed result is an artifact of relatively small sample size (less than 100 populations for each treatment), but if real it would imply that some populations are able to persist much longer than predicted by theory. An area for future research is therefore to determine if this pattern is real and if so what causes it.