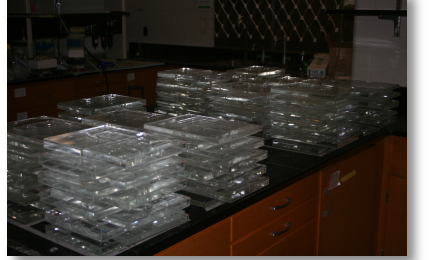 It is well understood that natural populations do not necessarily reflect the assumption of a homogeneous well-mixed population assumed by most of theories of population dynamics. Particularly, the appreciation the heterogeneity in environmental conditions has given rise to a developing body of work on metapopulations. We have sought to test some of the predictions that this theory makes with respect to population extinction. One such experiment looked at the effect of variation in dispersal, a key variable in most metapopulation theories, on extinction time in laboratory populations of Daphnia magna. Curiously, minor unintended variations in environmental conditions actually influenced extinction to a much greater extent than dispersal (Griffen and Drake 2009). It follows that it is necessary to understand how local environmental variations—differences between sub-populations that are sources and sub-populations that are sinks—effect extinction time. This question cannot be answered unambiguously in the absence of empirical data because there are theories that predict both that source-sink exchange will decrease time-to-extinction and that source-sink exchange will increase time-to-extinction. Therefore, we conducted an experiment to investigate the potential interaction between source-sink exchange (present/absent) and habitat fragmentation (small/medium/large). Results of this experiment ( Drake and Griffen, unpublished) show that source-sink exchange does indeed increase a population’s vulnerability to extinction. Interestingly, this experiment also revealed that extinction time was at its minimum at the intermediate level of fragmentation. Future studies will be needed to address the conditions under which this phenomenon can arise. At the very least, this experiment shows that the effect of fragmentation on extinction time is not universal.