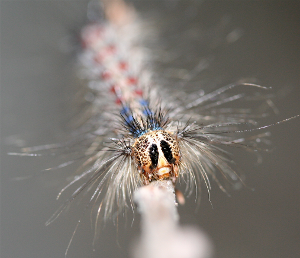 A partial differential equation model of population growth and dispersal developed by Lewis and Karieva (1993) predicts that invading populations subject to an Allee effect spread more slowly, and could not persist unless the initial extent of the population exceeded a critical invasion area.  Populations in small areas will lose a higher proportion to dispersal, depressing density and leading to population contraction and extinction.  Therefore, there is a critical amount of emigration that populations with Allee effects can sustain, which corresponds to a critical population area. This result has been demonstrated theoretically in several contexts (reaction-diffusion models, Lewis and Kareiva 1993, Soboleva 2003; integrodifference models, Kot et al. 1996; individual-based simulation models, Etienne et al. 2002), which suggests that the existence of a critical area might be a general property of systems with Allee dynamics. Empirical confirmation of this prediction could have substantial implications for the conservation and management of species subject to Allee effects.

Results
In a recent paper (Vercken et al. 2011) we tested this prediction with data from the gypsy moth Slow the Spread program which monitors the leading edge of gypsy moth invasion across a large area of the U.S.  Data from the tens of thousands of traps deployed each year was used to define non-contiguous population patches. We first calculated a Voronoi tesselation which defined the polygon around each trap within which all points are closest to that trap and then grouped neighboring polygons that contained gypsy moths. We defined 500-1900 population patches for each of 12 years and looked at the dependence of persistence on population area, population density and spatial location. In eleven of twelve years, population persistence depended on both population area and density as predicted. A generalized additive model was used to account for geographic variation in the strength of the Allee effect, proximity to established populations, and variations in sampling effort.  Additional evidence for the predicted effect of area came from a negative interaction between area and density in six years. Evidence for a critical area provides support for the importance of understanding the combined effects of the Allee effect and other population processes and suggests population area may be an important factor in both establishment of invasive species and conservation of rare species.