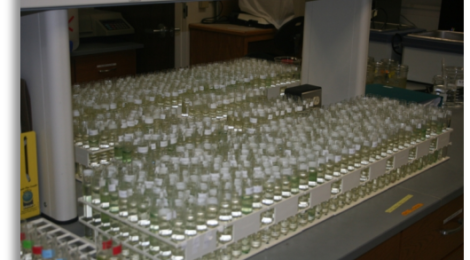 How individual organisms modify their life trajectories to cope with fluctuating environments and how populations fluctuate as individuals with different life history strategies are selected are fundamental questions in the theory of life history evolution. Encompassed within this framework are questions about the evolution of senescence, allocation of reproductive effort over the life span, and variation in fitness among individuals. As we have sought to understand the dynamics of population extinction – and particularly the role of demographic stochasticity – it has become necessary to understand the demographic consequences of these evolutionary forces. Particularly, for the experimental Daphnia system:

To answer these questions and provide an empirical test of the Wetiz-Fraser model student Katie McCurdy executed the first of a series of experiments in which individual Daphnia magna were reared from birth to death with individually applied experimental treatments. These experiments are now ongoing and we hope that the results will not only answer the demographic questions posed above but also might shed light on basic theories in life history evolution and the evolution of aging.